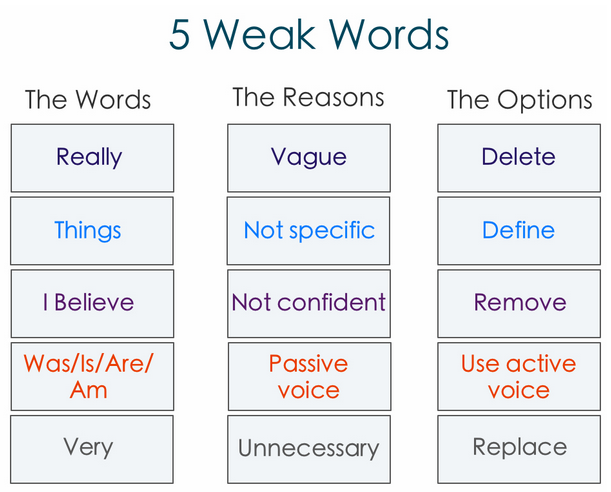 5 weak words you should avoid & what to use instead.

When I first began writing, I was unsure of myself. My sentences were filled with meaningless words and fillers. What I didn’t realize is that by using them I was sabotaging myself and my writing.

Weak words can sneak into our writing anywhere, anytime and when they do, they destroy the power of our work.

I’ve rounded up five weak words to avoid and some helpful tips for what you can use instead.

Why it’s a problem: The word ‘really’ is a crutch. It is used to convey emphasis but it fails spectacularly in this. Really doesn’t tell us anything important and is inadequate as a description. It’s an example of the writing the way we speak but it just doesn’t translate on paper or screen.

There’s also the issue of considering what the word “real” means. Real is a fact, it is not imagined or supposed. It is genuine. When you take this into consideration you’ll find that using really as an intensifier often conveys more emotion than we intended. If you are going to use this word, make sure to do so sparingly as to not lessen its impact.

Can be changed into: “The swimmer performed admirably.”

Nothing is lost by cutting ‘really’ from the sentence but simplicity and function is gained. As Mark Twain said, “Use the right word, not its second cousin.”

Example: “The article said a lot of things and stuff.”

The author Kurt Vonnegut often gave this piece of advice, pity the reader. He didn’t mean this in a disparaging way. What he meant was that we shouldn’t make the reader do more work than necessary.

When the words ‘things’ or ‘stuff’ are used, an additional burden is placed on the reader to figure out what the writer is talking about. These words are simply too vague. The writer uses them to save time but it ends up hurting both the writer and the reader in the long run.

Let’s fix the example from above: “The article said a lot of things and stuff.”

Instead, we can spell out what the article says: “The article discussed the principles of interactive design.”

I’ve clearly picked an extreme example to illustrate this one point: specificity rules.

Example: “I believe the author has a great point here…”

I had this Professor in college who wasn’t afraid of telling you just how crappy your writing was. One day he pulled me aside and said, “Andrea, you don’t need to say “I believe” we already know it’s what you believe, you’re the one writing it.”

Why it’s a problem: ‘I believe,’ ‘I feel,’ ‘I think,’ do not inspire confidence in the reader, they do the exact opposite. Their use causes the reader to question the authors authenticity and honesty. These words make the writer sound unsure of themselves and the topic discussed. It also forces the writer to overuse pronouns and that’s bad news. Here’s why:

Computer programmer James Pennebaker analyzed over 400,000 texts in his mission to see what our word choice reveals about us. When Pennebaker analyzed military transcripts, his team could tell individuals relative ranks based entirely on patterns of speech. What does this tell us? Our choice and use of pronouns reveals how we view ourselves and how we view our relationships with others. In short, it reveals our personality to the reader. This is fine in cases of autobiography but most of the time it only serves to weaken your work.

The use of words like, ‘I think’ or ‘I believe’ changes the focus of the sentence. Instead of the focus being on the subject, it is on the author. It’s like a big blinking neon light saying, “Hi, this is me the author talking, look at me sitting here talking about my opinions! Isn’t this great?” It’s not great. You take the reader out of the piece completely which is generally something a writer wishes to avoid, especially if you are trying to persuade the reader.

Case in point: “I believe the researcher has a great point here.”

Instead try: “The researcher has a great point here.”

This causes the power dynamics to shift. The sentence goes from sounding wishy-washy, to sounding confident. It also places the focus back where it belongs. Bonus points to everyone.

These are forms of ‘to/be’. What we are talking about here is the difference between active and passive voice.

Here the subject (Sally) is performing the action. It is clear what action has transpired.

Passive voice: “The letter was mailed by Sally.”

In this sentence, the subject has changed (letter) and is the thing being acted upon. The sentence structure is unnecessarily complex.

Why it’s a problem: Passive voice is most often used in scientific writing, and that’s usually where it belongs. It tends to be less engaging and requires the writer to use more words per sentence. Passive voice forces the reader to do more work to get to the same conclusion. Active voice allows for short, punctuated sentences that get to the point.

**Generic Disclaimer: Passive voice does have its place, and not every form of “to be” represents passive voice.

“Substitute ‘damn’ every time you’re inclined to write ‘very'; your editor will delete it and the writing will be just as it should be.” — Mark Twain

Example: “Scientists are very interested in finding out more about the duck-billed platypus.”

Why it’s a problem: The word ‘very’ does not communicate enough information. It’s been called one of the most useless words in the English language. It’s one of those penny words that writers throw in to magnify another word. The only problem is, it doesn’t do that.

How does one avoid using the word ‘very’? Start off with a more descriptive adjective from the get-go. Instead of saying, “very good” say “wonderful”. Remember, your reader’s time is precious. It pays to be as concise as possible.

Another solution is to cut the word ‘very’ out of the sentence completely.

Again, nothing is lost by doing this: “Scientists are interested in finding out more about the duck-billed platypus.”

There is a seemingly infinite supply of wonderful words available to writers and let’s be honest, the word ‘very’ isn’t one of them.

The act of writing—from emails to articles and everything in between—involves taking the reader on a journey. Each word should move the reader closer to the conclusion of that journey. If it doesn’t, get rid of it. I promise your writing will be better off for it.